Staying at a Hotel in Warrington, and today is my Birthday, not my favourite day, but it was the start of my Journey to visit my first Golden Post Box.

How excited was I, to think that I would be at Jason Kenny’s Golden Box in Bolton, that’s if we can find it? I’m still on a high from watching Sir Chris Hoy winning his second Gold Medal and Victoria Pendleton getting silver. 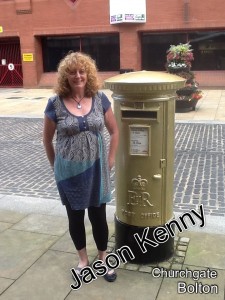 There was one big problem on arriving in Churchgate, “All double yellow lines”. All I wanted to do was get out of the car to get to the Post Box, but Hubby insisted he was going to find a parking space. Who would have thought that the anticipation of the great build up of joy in finding my first Golden Box (1), was to be taken over by a dispute on whether to park on a double yellow line or not (Every Golden Post Box should have a Golden Parking Space to avoid such worries).

At my first box I was running high with emotion and still mixed up on how things were going forward for me, to be at this Golden Post Box, and yes it was a great achievement for me to be here but also it was the start of my journey to say “yes, it is good to be alive and #lifeisgood”.

On to Manchester and LLoyd Street/Albert Square for Philip Hindes Gold Box(2), this time looking for a Park and Display spot. Albert Square is a nice place to have a box with a backdrop of the Town Hall and the sun looking good behind it. Yes, I was feeling good at being at my second box and for the great joy that all the Olympic Sportsmen and women had been giving me. I can say I am so proud to be British. 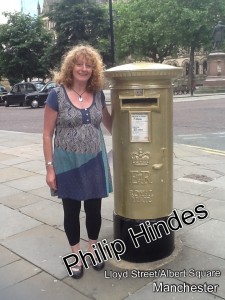 Obviously, not everybody shares my enthusiasm as down the street in the Cafe, the waitress was not even aware of its existence, buts she knows now and was thinking of making Golden Cup Cakes in his honour.

This is a good start to a Golden Day all round.

The day ended back in my home town and after a nice meal out with all the family at Wagamama, trying food I had not eaten before (I didn’t conquer the chopsticks and had to ask the waitress for a fork). So it was a nice end to my Birthday, for all of them to come into my journey and find Greg Rutherford’s Golden Post Box (3) in Milton Keynes. 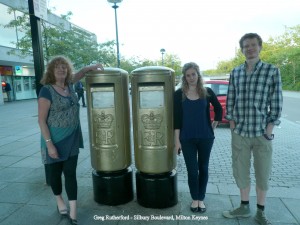 Now I can say that my Journey has started…:-)xx

The Journey continued for several months but eventually I managed to go to every Gold Post Box in the Country and loved every minute of it, meeting new people and sometimes….. even meeting the Athletes for whom the boxes are a tribute for, specially Joanna Rowsell …….. thank you for sharing the moment. 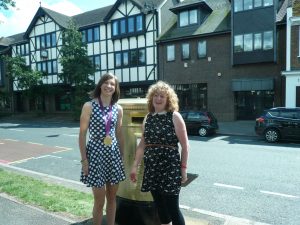